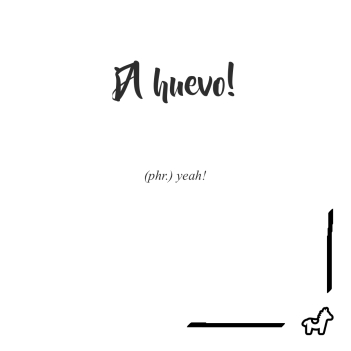 ¡A huevo! My first post to help you learn Spanish 😀

The pronunciation would be:

With the phonetical alphabet, it would be a-ˈweβo. But who knows how to read this?

¡A huevo! is a very Mexican phrase to celebrate something exciting. The closest equivalent to English would be, yeah!

Here you go with an example and its translation to English…

Did you get it? It’s pretty easy, right?  Just as a fun fact, this phrase literally means “to egg”, non sense, right? 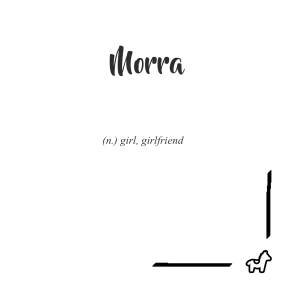 We all like to show off when we are in a relationship with a pretty girl and therefore we need to know how to introduce our better half to others, don’t we?

Today, we bring you a word that it’s used (mostly) in northern Mexico to tell everyone that a girl is YOUR girl, or better said, your girlfriend: morra.

At the beginning it may sound a bit strange, maybe even rural, but it’s a very common word, and apart from meaning girlfriend, it can also just mean “girl”. So don’t be afraid of saying that a female person is a “morra”.

Now let’s see a small dialog as an example on how to use the word:

Marta: ¡Igualmente! (Nice to meet you too!)

Want to know how it’s called a girlfriend in Spain? Then you can easily say “chica”, which also happens to be used to call any girl. Do you know any way to call a girlfriend in other Spanish speaking countries?

We’ll be back soon with another word, meanwhile, follow us on instagram.com/spanish.idioms 😀

We all are very familiar with the adjective “cool” that helps us to describe situations, people, moments, things, experiences, and so on, in a positive way. This time we present you with its equivalent in Mexico: chido.

And just like you would use cool in English, we do in Mexico, it works in the exact same way when constructing sentences in Spanish.

There is not much to tell about this word except that is A MUST to speak Mexican Spanish and that you can use it with everyone no matter their age or the place, as long as it’s an informal situation.

Here you have the example:

Are you looking for the version from Spain? Then you have to use guay, this is how our Spanish friends translate cool into their lives.

We’ll be back soon with another word, meanwhile, follow us on instagram.com/spanish.idioms 😀

Do you need a phrase to tell someone that their comments or behaviors are out of the line? This is one is for you!

A very typical phrase among young people, sometimes also among ‘cool’ parents, to tell the people in a polite way they have a misconduct.

Although this phrase most of the time is used to express disapproval, sometimes, it’s used to mean that whatever the person did, was funny.

Pay attention to the fact that the phrase can be transformed to talk about someone else (not the person that you’re speaking to), that it can be singular or plural (i.e. se pasa, se pasan, nos pasamos, etc.), and that it can be used in past tense according to the situation (te pasaste, me pasé, se pasaron, etc.)

Sally: ¿Te acuerdas de que salí con Ramón? (Do you remember that I went out with Ramon?)

Sally: Pues me dijo que no le gustó la película que vimos y le dije que podía irse al carajo. (Well, he told me that he did not like the movie that we saw, and I told him to go to hell.)

Jules: ¡Te pasaste! No era para tanto. (You were over the line! It was not necessary.)

Now you know how to disagree with your friends behavior, I hope that this will help you a lot, we use it very often in Mexico. Let me know if you have any phrase that you’d like to know how to say in Spanish. 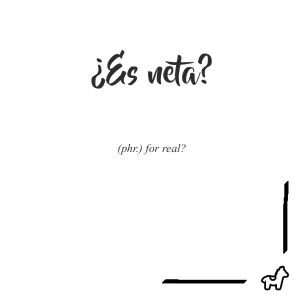 This is one of the most popular phrases in Mexico when speaking to someone young. It’s a question and it can also be an answer. It means “for real?” or “are you serious?”.

This phrase can be used to express doubt, surprise, or annoyance.

Dany: ¡No tienes idea de lo que pasó hoy! (You have no clue what happened to me today!)

I will work later on including a recording of the conversations, maybe you’ll be able to imitate the pronunciation and accent to make it sound more natural when you use this phrase with your friends.

This is a text widget. The Text Widget allows you to add text or HTML to your sidebar. You can use a text widget to display text, links, images, HTML, or a combination of these. Edit them in the Widget section of the Customizer.